Another year, another round of seed-starting

Little Edie has adaptation skillz at the ready.  Any time there’s a pile of something warm-ish in a greenhouse, she’s sure to land and nest.

We are all born tinkerers.  Tinkering’s a prime adaptive skill, of course, honed over millenia to help us fulfill our needs.  In this age of relatively easy money, though, I think that within the ease at which we exchange money for goods, we’re also exchanging something else.  With every dollar goes a bit of inborn knowledge, some nascent adaptation, a skill…simply because it’s easier to pay for it than to do it yourself.  We’re not so quick to tinker!

I am surely not saying you all should get out a circuit board and some solder and make your own computers.  Hah.  No; rather, this is more a signal to myself that not all my troubles have an easy monetary fix.  Indeed.  Sometimes, life requires a little bit of pain.

Case in point:  I abhor indoor seed starting.  Really.  And every year, I seem to be on a quest, a grand period of Deep Think, to solve this problem.   It’s not an insurmountable problem.  In fact, it’s really not even a problem.  It is just, of all that goes into gardening, seed-starting in trays interests me the least.  Maybe because it’s phony?  Maybe me warming 48-plug trays to start the tomatoes and okra in my basement is somehow cheating the process?  Ah.

Who knew I was such a purist, right?  Well, I have no problem at all planting seeds outside in the ground.  And I do start a fair number of spring/summer veg in rows in the greenhouse beds themselves.  But not all plants find these beds–and their wild temperature swings–to their liking.  Knowing how some seeds require a constant warm-ish soil temperature to germinate, is there a way I can get around this?

Nope.  Not if I expect a harvest. 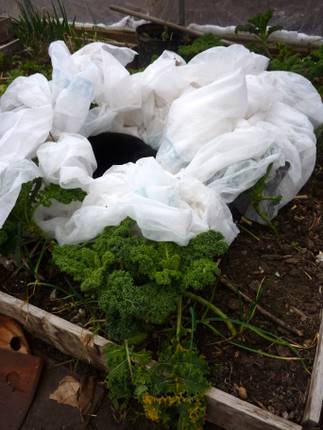 Shrewd:  When moving them to get at what was under them, I threw the agricultural cloth in a pile over the top of the kale.  Edie took that as an invitation to lie UPON said kale.

Not all early veg are so picky, though.  For the last two years I have experimented with growing the seed-start trays in the greenhouses themselves.  Problem was, the voles (field mice, the scourge of the winter greenhouse) found a few of the seed trays and mowed them down of their particularly delectable victuals, so I needed them off the ground or somehow out of harm’s way.  A makeshift table seemed to work, but it cast shadows…and the warming late-winter greenhouse needs no shadows.

Now this year, on Leap Day, I actually bought my way out of my problem by getting a new wire shelf for the old greenhouse’s back wall.  Wire shelves let the light through, I figure, so I can leave it on the wall all year…and darn it, the vermin can’t jump that high. 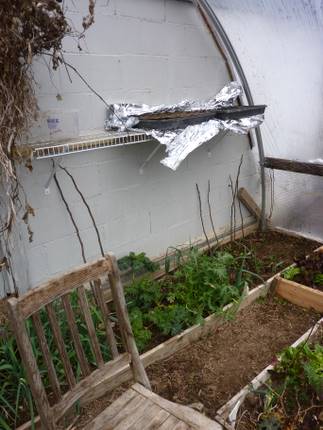 Probably the lamest tinker ever, new shelf on back wall.  Mylar blanket wraps about trays of herb, flower and cabbage-family seeds on wire shelf.  Those sticks coming out of the ground?  Attempts at fig propagation.

But damn.  The tomato, celery, okra, tomatillo, and pepper family plants are all testing my patience in the basement.

Here’s a bit more context.  Dang, I try not to show you what a slob I am…sorry.  But do you see Edie?

14 responses to “Another year, another round of seed-starting”