On the downsides of a mild winter

Occupational hazard:  a farm girl’s glasses will fog when she goes from 40 outside to 85 in

I don’t know about you, but I have found this mild winter very enjoyable.  Perhaps it’s the memory of those long winters spent in Minnesota.   Every Minnesotan has “I lived through the cold” stories, but I don’t know many people who had to get their car’s manual transmission gear fluid changed:  despite its being garage-kept, I couldn’t get it in reverse or first gear when the cold was in extremis.  So I humbly accept any day the mercury doesn’t go below 30 with gratitude.

This weather has come with unexpected downsides, though.  One, the animals are just messed up.  Chickens want to sit their many eggs.  Earl the tom turkey is feeling love in the air, so Ruby spends her days hiding from him under the back deck’s picnic table.  (Luckily, the hose remains unfrozen so I am able to clean up after her, but I do feel her pain.)  The fuzzy goats are happy to be outside, but that’s mud between their hooves…not pleasant.  And here in the Fruit Belt there is gloomy talk that fruit won’t set without the usual extended hard frosts of normal winter.

It’s also had an unexpected downside for the resident gardener.  That spring panic that normally hits in April?  You know, when you can’t seem to finish any one project because they all beckon?  It’s here now, in February.  Sigh. 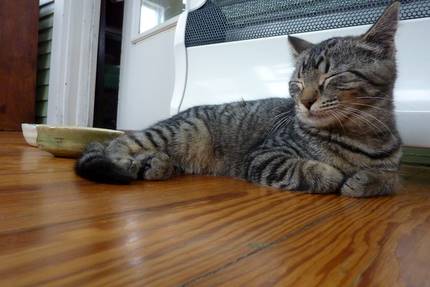 10 responses to “On the downsides of a mild winter”