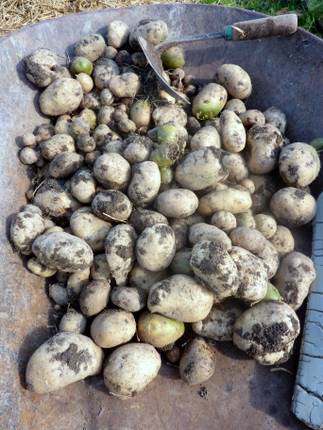 If someone hasn’t told you already, rely on me to say it:  Some, if not most, of the veg and fruit you will grow will not resemble grocery-store produce.

And what does this say about you, humble organic gardener?  Are you a failure for having cracked tomatoes, vole gnawed-upon carrots, the occasional sun-exposed greenish potato?  The scabby apple, the slug-eaten cabbage?  The (horrors) lacy flea beetle-eaten tatsoi, the wormy broccoli?  Do you SUCK at this growing thing?

You, most assuredly, do not.  You are simply the victim of inflated expectations. The stuff in the grocery store is frankenstein food, carefully chemically inflated, picked underripe, coated with wax and shipped long distances merely to fool you into thinking This is the Pinnacle of Produce.   Do not be fooled, and take heart.

Merely tasting any of your (painfully) (laboriously) (mother-hennishly) homegrown produce should assure you that you’re doing the right thing.  That you’ve befriended your vegetable peeler in ways that you never previously considered?  Consider this your new reality.  Get over it, and tell anyone else who would care to get over it, too.  It ain’t no beauty pageant.

That said:  even though I am now growing for lots of other families thanks to my small CSA, there is stuff I won’t share with them.  Harvesting my potatoes and cabbage recently kind of brought this home to me.  I have absolutely NO problem peeling a green potato or two (as long as it’s not overly green) and/or chopping away a thick-cored, tough red cabbage, but my CSA peeps might!  So, what to do with my harvest of Uglies?

Soup.  Soup equalizes all ugliness, and is in itself quite transformative.  In the big pot tonight are a dozen spotty beets, three wormy leeks, a few scabby apples, and about four slug-riddled red cabbages:  clean off all their bad spots and bugs, chop finely, place in that big pot simmering pot of caramelized onions and garlic, a handful of herbs and topped off with a decent (homegrown/canned) parsley/celery-based vegetable broth?  This is the basis for a wonderful vegan red soup.  Once fully softened, it gets put through the food mill.  Wine red, appropriate for the harvest.  It’s up to you, CSA member, on how to garnish it:  feta?  yogurt?  croutons?  chives?  Look in your share this week and find some inspiration.

And the rest of you homegrowers not in my CSA?  Do NOT let anyone tell you your veg/fruit children are ugly!!

14 responses to “On ugly produce”