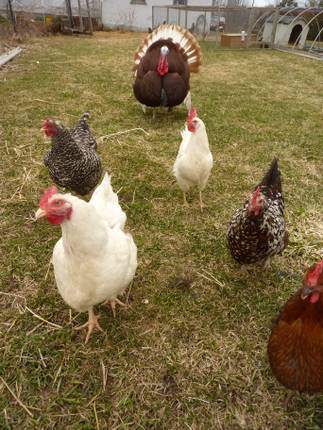 There is a small window of time between melting snow and garden season when the chickens are allowed to run around unpenned.  They wander fairly widely, mostly in pursuit of the newly-sprouting grass, but mainly they all make a beeline for the gardens.  Deeply mulched beds need to be deeply scratched to find those worms within, you see, and then there’s the magic of The Compost Pile.  Oh the delectable wonders to be found in that monstrous pile of stank (if you’re a chicken, that is).

I have set the compost bucket down to open the gate.  They have found it.

And then that window closes.  Slams shut, if you ask them: whaddya mean, we need to stay in here all day?  Their protestations are mighty.   Squabbles break out.  Feathers fly.  They are now confined until Happy Hour, usually around 6pm-dusk.  And they can tell time, so…at 6 you better be prepared to spring them loose.

The reason for their confinement?  The garden has been planted!  Yes, St. Patrick’s day, traditional pea- and potat0-planting day, was wonderfully warm and even sunny, so I locked up the birds and began the season.  These wily critters easily can fly over the 5′ fence encircling the gardens, and once they do, inevitably they will scratch up things that they should not. 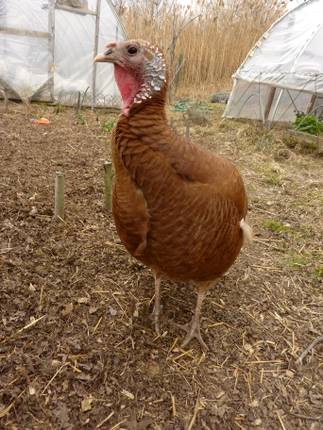 Queen Ruby asks “but can’t I stay?  I won’t scratch things as much as the chickens,” to which I reply, no, m’dear.  She loves sprouts even more than worms.  (and notice the greenhouse roll-up side is up!  this is the earliest ever that I have had to do that.)

This entry was posted in chickens, etc., seeds, weather. Bookmark the permalink.

16 responses to “On pea-planting season”