On Friday morning in the milkshed I heard a thought-provoking EarthSky episode.  (They’re all thought-provoking.  This one just happened to hit home because it discussed one of my main interests:  namely, growing one’s own food, and the effort and land that it takes to do so.)  Mostly, it was a discussion of simplifying the measurements so we can understand, universally, how much land can feed how many people as efficiently as possible.

By 2050, our planet might need to feed 9 billion people. How do we improve Earth’s food systems – the way food is grown, harvested, transported, and distributed – to meet that challenge? The first step is to observe and measure the way we farm now….

Sean Smukler: To improve the system we have right now, we need to know what works where, and why.

Sean Smukler is an agricultural ecologist at Columbia University and a co-author of the July 2010 article published in the journal Nature. He said creating a common system of measurements – for example, how many calories a farming region can provide per person, or how much energy is expended per unit of food – will help move the world toward farming methods that can feed 9 billion people….

Nine billion.  The mind reels.  I *know,* incidentally, that with current effort and garden space I can marginally feed nine people.  My garden and greenhouses currently make a huge dent in the caloric needs for us three…the other six or so are using my goods as supplemental fare to their own diets.  And this is with me not putting much effort into growing pure calories, pure carbohydrates.  Let’s face it:  I spend a considerable amount of time fussing with my salad stuff!  Nary a calorie there.  Fancy-pants salads:  Tell me they’d feed the starving.  They won’t.

But if you’re worried about the lights going out and your needing to feed your own, can I make a pitch to you?  Consider the humble potato.  I may not blog about them much, but…I grow more potatoes than I do any other vegetable.  They are surprisingly easy to grow, are tolerated by almost all people, store well for months and their yields will always be at a bare minimum twice what you stick in the ground!   In point of fact their yields can be crazy.  Really.  Truly.  And you don’t need to spend a minor fortune to get started.  IF you can find organic potatoes, chances are they’re not sprayed with anti-sprouting nastiness, so…plant what you can find at the grocery store.  Or go to your local feed store:  they might not have more of a choice than a red, a russet, and the rare Yukon Gold, and they won’t be organic, but…they’ll be cheap, and they’ll grow for you.  You don’t, in other words, need to spend $12/pound for seed potatoes from some seed supplier far, far away.

Not everyone can grow potatoes of course:  they hate the hot summers of the southern U.S.  Sweet potatoes, however, LOVE hot summers.  I have grown them successfully here too for years, me who hangs out on the 42nd parallel, here where it got above 90 exactly 3 days in 2010.  And like regular potatoes,  you’ll have them forever, but growing slips is a bit harder than sticking a sprouty spud in the ground.

Winter squash is also a safe bet for you if you’re looking for carbohydrates that, like potatoes, store well.  I have crazy luck with winter squash, but it’s not due to me, it’s usually due to my compost pile:  it’s from here I tend to harvest a good portion of my seedlings!!  Squash in general are nutrient pigs.  If you can plant them IN compost, they’re more than happy.  Consider well the signs of bugs but other than that, they’re fairly hardy and prolific if you have the space for them.

And then there’s beets.  Not everyone loves them, but as far as sugar goes…we do make sugar out of certain varieties of them.  Look to their sibling chard for an easily grown shot of greenery, too. 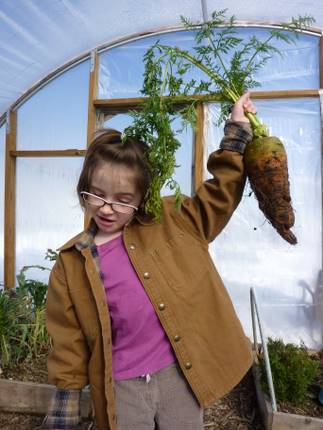 Carrots are another high-calorie root crop.  I succession plant them four times a year so that I always have them; I plant the larger storage varieties to harvest in my greenhouses in the winter.

Tomatoes.  You’re all growing tomatoes, right?  Canning them is a safe bet for long-term storage.  You can also dehydrate them, especially the small varieties.

So yeah.  Throw in dried corn, beans, and a variety of green leafies, and you’ve got a fairly well-rounded diet out in the garden.  Add a fruit tree or three, and bingo! lots of carbohydrates, home-grown!

16 responses to “On growing calories”