Of all the years, this was not the best one to start a CSA to sell my surplus vegetables.

It wasn’t a bad year, weather-wise.  In point of fact, this year was fairly normal…being just a touch hotter and drier than what I have come to expect.  So I can’t blame the weather for my lack of planning.  Indeed, this lack of planning?  It is 100% on me.  I have been a GARDEN SLACKER.

You see, normally I am a succession-planting fool.  “No Earth Unplanted, Ever” is the m.o. that I have worked under for years.  Likewise, I rapidly pull and replant areas where harvests wind down (lettuce out, bush beans in; beans out, broccoli in is the pattern for a typical bed).  But this year, because of my goat-y and oven-based distractions, the garden has suffered an amazing lack of attention by yours truly. 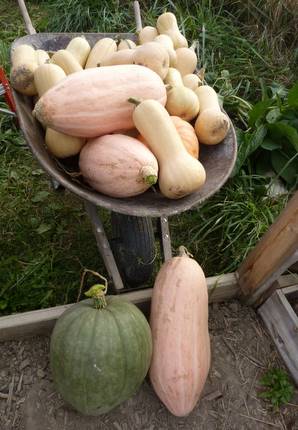 One of two.  Last year, I think I had 4 wheelbarrows’ worth.

That’s not to say it hasn’t been productive.  Nope.  Exhibit A:  This year’s winter squash harvest.

I did not plant one seed of this.  These are all volunteers from the compost.  And yes:  I was lucky:  the Queensland Blue squash at the bottom left seems to have not been crossed with anything else; same too with a couple of kabochas buried in the ‘barrow.  The monster pink banana squash though?  They’re a bit…bigger than normal, so obviously there was some cucurbita hanky-panky going on.  Not seen?  Pumpkins, and zucchini, even more butternuts and more than a few mutts that did cross. 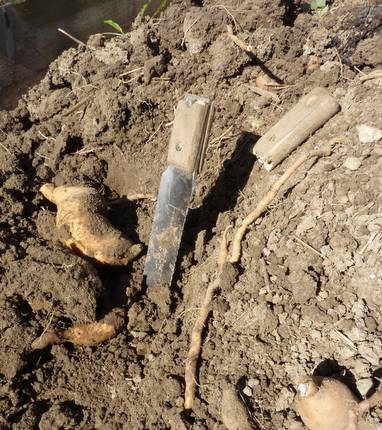 It’s not to say that harvesting has been, exactly, easy this year.  Witness my poor hori-hori, whose handle was a victim of our tough clay soil while unearthing the sweet potatoes.   Crack!

I do scratch my head and wonder what the point was to my spring plantings.  I believe I had a notion that I should grow as many starch crops as possible, because, frankly, you plant potatoes in March and harvest them in October with nary a care in the months between.  So I hope my CSA folks like potatoes and sweet potatoes as well as winter squash…there’ll be plenty to eat.  There’s also a lot of leeks out there.  I think I misread a label and planted out, instead of a flat of onion seedlings, one of leeks:  I must need glasses.  The seedlings aren’t THAT similar had I been paying attention.

Well.  It will all work out in the end methinks, but if I am going to have paying customers, I probably should get more serious about this venture.  Eeeks.  This means I need to…plan.

12 responses to “On the harvest”