On the killing season 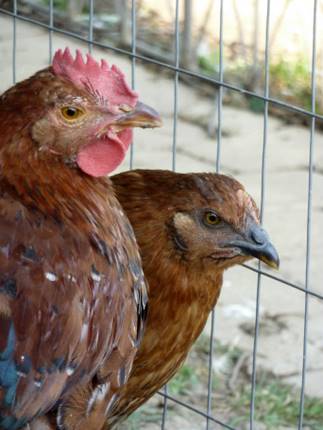 The wind is coming in strong puffs, and it’s bringing with it the smell of the lake.  I’m not too happy about the task at hand.   I am dry-plucking a chicken.  A half-grown chicken, actually, a half-grown bantam…that’s practically no chicken at all as he probably only weighs a pound, a pound and a half.  Four and twenty of them, yes, might just fit in a pie:  I am holding him by his legs and I believe I have eaten bigger frog’s legs in my lifetime.

I had to put the guy out of his misery, you see.  His foot had gotten stuck in the little fence surrounding our back yard garden, and his compatriots had pecked him into a stupor.  I seriously doubted he’d recover from his head wound.

Poor guy.  I know I am either grimacing or am biting my lip; I try to just relax and do what is needed before my husband and daughter get home.  Poultry deaths aren’t easy, unless they’re expected.

It’s been a year of lots of birth and little death around here this year.  Six turkey poults followed the original seventeen of this spring.  (We kept three.)  Twenty-eight chicks have hatched under various chicken mothers; of them, eight of those cute bantam babies died when their idiot bantam mother decided she needed her nest up on top of a box, and the chicks couldn’t reach it, dying of exposure in a 60-degree night.  I walked in to the goat shed in the morning gloom and thought, who left these kleenex lying around, when it was little bantam bodies I was seeing on the straw.  And then this little death in my hand:  we’re left with twenty.  Plus the twenty-five meat birds (Freedom Rangers, much overrated) and the five girls whose egg-eating habits have sealed their freezer fate…as you can see, exponentially, the poultry population explodes every summer here.  And it recedes in the fall.

We’re keeping two laying hens out of the twenty home-hatched babies that remain.  There are three female bantam chicks who might live another year too, depending on how generous I am feeling.  All the home-grown chicks are amazingly colorful, but all the bantams have their father’s boring white plumage.  With all of them, I stare and think “Who’s yer ma,” hearkening back to one of the putative definitions of Hoosier (i.e., one of the thing Indiana residents said in days of yore was this direct question of your parentage:  who’s your ma, who’s your pa, who’s your folks?, who’syer, hoosier).  Daddy is definitely known:  he’s our handsome Black Sex Link boy Mary Ellen, and he’s lent speckles to every baby.  All the chicks are named and cared for by our daughter, which is why I was hurrying in my grisly task.

Plucked, gutted, de-headed, de-footed; this little creature is reduced to nearly nothing.  He’s crowed his last croaking adolescent crow.  I pluck the last of his down off his waxy skin, hose him off and bag him up for the fridge.

This entry was posted in chickens, etc., death. Bookmark the permalink.

14 responses to “On the killing season”