I was asked by a far-away friend how the gardening year has been so far.  “Four words,” I said.  “It’s a no-hose year.”

Not full power but coming close.  See this post for what it looked like two months ago.

This certainly isn’t anything to complain about.  No, really; the last year we had insane amounts of rain is the last one to which I can directly compare, and I will take this year, thanks.  And I am much happier with the garden’s reaction to this rain now.  My sweat has turned into equity.

You see, in 2007, we had lots of rain.  We’d been here for a year and a half and thus had only two summers’ worth of observation and (more importantly) soil and land improvement under my belt.  I lost a whole flotilla of crops that summer due to the unending drip-drop…everything got hit.  Badly hit.  Drowned roots = dead plants, see; gone were my hopes of complete veg self-sufficiency…that year was my first attempt.  So that fall I trenched and installed perforated drain pipe around the garden (300 or so feet of the stuff, and through clay, too) and I have consistently added more and more vegetative matter to the existing outdoor beds.  It’s helped, a lot.  The plants are healthier and the growing ground is less wet. 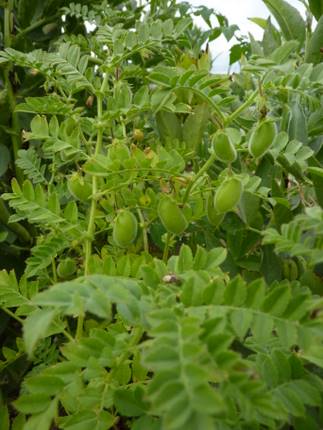 But a little less rain would help things along!  Every spring, I do actually till two small areas of my garden:  these zones are too big for raised beds but wonderful for the sprawl that is The Winter Squash Vine.  This year, though, no dice.  Can’t till in wet clay, and it never goes longer than two days without rain.  So it looks like I will have to forego another ginormous winter squash harvest…which is just as well considering how unloved that fruit becomes in our household come January.  Likewise, I have seeded the outdoor root crops three times now, which are some truly awful gambling odds.  I don’t like to gamble with my carrots, man!  Luckily, July is around the corner so indoor carrot season is fast approaching.

Interestingly, I read a recent article about my extension service’s adoption of greenhouses (high hoops, hoop houses) in my area for…fruit growing.  Really.  This shouldn’t surprise me as I live in The Fruit Belt but I can definitely see the advantage of growing cherry trees under cover here.  Doesn’t that sound…odd?  It makes sense though.  Wet/Sunny/Hot/Repeat means your cherries are going to explode on the branch, their roots are taking up too much water.  Modulate the water, the wind, the bugs, the birds, and the temperature swings and indeed these plastic bubbles will grow fruit just as easily as they grow veg.

Anyway, I look back at 2007 and realize it too was the year we put up our first greenhouse.  With that greenhouse went my worries about weather extremes…and up shot my odds for veg self-sufficiency.  You wanna improve your own odds?

You know what I am going to say, don’t you?

It’s great for drying things, for extending your seed-saving efforts, and of course for many different kinds of veggies and herbs

This entry was posted in greenhouses, weather. Bookmark the permalink.

22 responses to “On weather gambling”