About 90% of vegetable gardening is merely keeping your eyes open.  I’d say another 5% is actual “work” and 5% is harvesting and storing but really, all that “puttering around in the garden”?  It’s entirely necessary.  It’s field work!  It’s direct observation!  Even with a glass of wine in my hand, I am WORKING, people.

And it is through direct observation that I realize my darned greenhouse seedlings are never ever gonna grow past the stubby 2″ phase unless I do something to stop the munching damage caused by the sowbugs.  I can’t do anything about the sowbugs barring absolute war so…I employ a simpler strategy.  In this instance, entrapment. 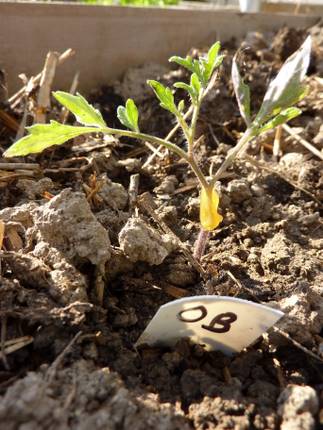 The caramel-colored blob is this year’s barrier method.  And “OB” = “Orange Banana,” a delectable paste tomato.

Last year I mounted an office-supplies war with indifferent results (the greenhouse was open-ended thus wind-riven; these collars up and flew away if not simply apart).  This year, I applied the stuff normally applied to tree whips (sapling fruit trees) to prevent girdling by other, equally hungry insects.  [It’s called Tanglefoot; it’s a gooey waterproof paste of wax/oil; used to be made in Grand Rapids but like so many Michigan companies it’s up and gone away.]  Can’t say it won’t stop the bugs from decapitating the seedlings below the point of the goo, but it’s something.  Now, I stand back and watch.  And sip.  And watch some more.

9 responses to “On constant battles”