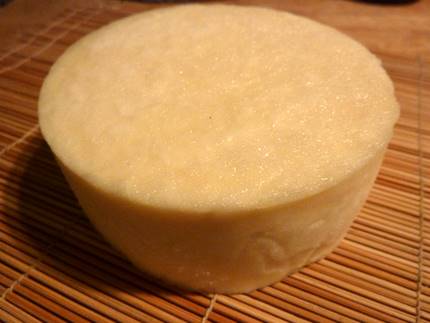 Just because I am brave, I decided to make a pressed, aged cheese for my third attempt at home cheese making.

I had help with the selection, though.  When asked, my daughter said “Either feta or cheddah,” laughing.  I told her the cheddar had “delayed gratification” written all over it, as it should age at least 4 weeks before cutting into it.  And I chose to make cheddar because, unlike feta, I had all necessary ingredients.

A pressed cheese requires a press, of course.  I have a somewhat thrown-together setup made mostly with things found around the house, including weights from Tom’s fitness area and some pans from the kitchen.  The mold itself is entirely easy to make at home except for the small fact that PVC pipe (which is what mine is made from) is sold in 10′ lengths and there is no way I would ever need that much.  Of course you can use anything else, too:  an empty BPA-free can, say, with both ends cut out.  The follower is simply a piece of maple 1x wood cut to fit inside the pipe.  (I purchased both this press and a larger one from Caprine Supply as even I am known to throw the rare dollar at convenience.)  And I punched a pie tin (downward, no sharp ends inside) to drain the resultant whey.  There’s another pie tin below it that holds the punched tin aloft by four mason jar rings.

I told you it looks thrown together:  the drainage system, left, and the final pressing, right, w/ 30 lbs. in the pot.  That’s another mason jar acting as a plunger.  The white thing is the mold, and you can’t see the follower, and yes, those are washcloths soaking up the resultant whey.

You won’t need the jar rings after the first pressing.  Towels will do.  And:  anything you can do to stabilize the weights is helpful.  I did the first pressings on the floor in case the darned thing wanted to tip over (and it did) but…now that we’re on the last pressing the weights are safe in their pot atop the counter.

This cheese did take a good part of my day to make, but it was more busy work (checking temperatures, etc.) than active work.  It gets pressed under different weights for a total of 28 hours, then it gets to dry (covering the outside with salt), then waxed, then aged in the cellar.  Sounds like a lot of work but…good things take time.

This entry was posted in fermentation. Bookmark the permalink.

11 responses to “On hard cheeses”