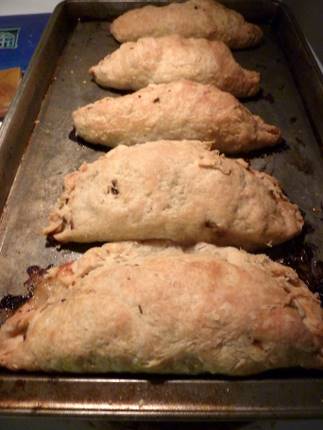 Tasty if not pretty

A bit of Michigan on the plate tonight!

Half of my family hails from the Lake Michigan coast of Michigan’s Upper Peninsula.  Both sides of my dad’s family had long history up there, mainly on islands of both Lake Michigan and Lake Huron as they were all fisherfolk if they weren’t lumberjacks. This is knowledge that comes to me, incidentally, from my own genealogical research and not family yore: Dad wanted nothing to do with his family and died when I was 13, so all tales and secrets and recipes died with him. Suffice it to say I have since filled in a lot of blanks, and I would hope that at least one or two of my ancestors had a recipe for pasty up their sleeves. If not they, then loads of other Yoopers know how to make them.

These are basically meat-and potato-filled turnovers. The typical recipe includes rutabagas, and so I did as well; carrots, celery, onion…no other spices other than salt/pepper is customary but, well, I adore my spices and so added a few. Supposedly these lunchbox pastries hail from the Cornwall-born coal- and copper miners who worked the U.P.’s northwestern mines in the late 19th century. Now you cannot drive 30 miles on any major road in the whole peninsula without hitting a tourist-y eatery that sells PASTIES (all caps always).