I’m cheating this week by showing you something I made for dinner last week.

Oxtails:  The majority of Americans just have never eaten them, despite their high overall beef consumption. As a newly-returned carnivore, I was shocked by how much meat cost, even the “cheap” cuts of meat!  Sixteen years of not having a “meat tax” on my budget…let’s just say life as a veg was cheaper.  S0 as a carnivore I’m predisposed to be cheap, or, rather, thrifty. Well.  This means I’m not afraid to try new-to-me cuts, and oxtails were a revelation.  So much flavor!

Of course by cheap I don’t mean cuts from cruelly treated feedlot animals.  Nope.  We buy our beef and pork by the quarter and half, respectively, from small farmers who pasture their animals, raising only a few per season.  By ordering these quantities, you can usually have your say about how you want the meat processed (lots of chops, say, or more ground) AND if you are adventurous, you can request the odd bits that the butcher usually just takes as his, er, cut of the cuts.  Like oxtail, which is simply the tail of a steer.  In my last beef order, I asked for it: and got all 3!  It seems nobody else wanted it so the farmer sent all the tails to my order, gratis.

So maybe Americans don’t eat it much (hey: more for me at the butcher), but leave it to thrifty folks like the French (indeed) and Koreans (among others, of course) to really know how to use oxtail.  Pot-au-feu is a double dish:  a beef broth, then a meat dish; pho, likewise, often utilizes oxtail to give it its strength.  Many French recipes do suggest oxtail be used for two meals.  Gotta like THAT kind of meat thrift. 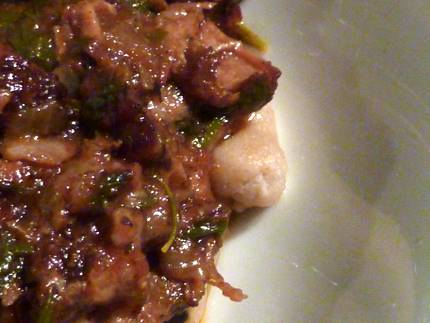