I confess we’re not much for leftovers here.

It has been argued that making “extra” food might save you time later:  that, say, doubling your rice means you have enough to quickly make a stir-fry, or pudding.  Knowing me, knowing my family, knowing the Black Hole of Shame that our refrigerator becomes if I actually SAVE leftovers, I have been making a huge effort over the last few years to Never. Ever. Have. Them.

That never quite works out around Thanksgiving, though. 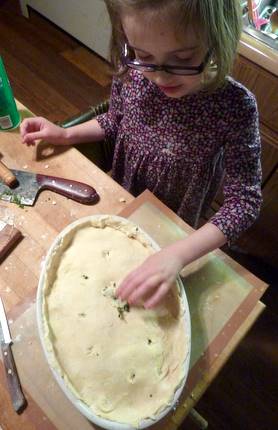 If I were ever to teach basic cooking, I would teach two things:  pate brisee (piecrusts), and biscuits.  [Both make you quickly familiar with a pastry blender (two butterknives also work) and heartily at ease with a rolling pin (excepting drop biscuits, my personal favorite).  Both, too, make you a genius as far as disguising leftovers, if you have them, and hey, even fresh food is special with a crust of browned buttery bread!]  As it is, I teach my kid instead.  And she’s becoming a whiz with a piecrust.

good enough for leftovers of leftovers!