Happy days in the back pasture: Mama, Daddy and baby geese

The grand goose experiment is over.

We found a great home for our mated pair, Mel and Yoli, on Friday.  Monday was the day their babies went to the butcher.

Geese, chicks and tiny turkey at the far right center

I am a little wistful about Mel and Yoli. As goslings, I loved their soulful eyes, their yellow-trimmed gray coats, how solicitous they were to the turkeys (same age, but much tinier), allowing them to climb onto their backs and under their wings to sleep.  They grew to be sweet full-grown geese, flying around the place when released from their pen, always up for a gambol, a stroll about the property with us.  Puberty happened in spring and we found out I didn’t have two ganders and a goose, we had two geese and a gander.  The non-bonded girl goose became the odd girl out, and the first in the freezer. 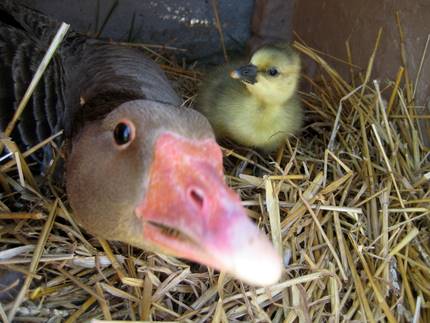 Mel and Yoli (named after Tom’s great uncle and aunt, a kooky couple) had a radical personality transplant when they became parents.  Jeffrey was their first-hatched gosling, brought out into the world by Ruby our turkey hen.  Ruby knew he was no turkey, so in the pen with his parents he went, little fluffball that he was.  I figured Mel would either attack him or accept him.  (Yoli was sitting 10 eggs, her parenting energies thus directed elsewhere.)  Mel of course accepted Jeffrey and the six goslings that followed him. 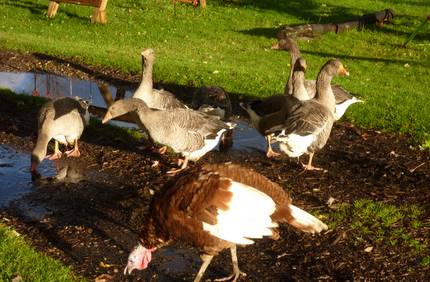 Baby Turkey and the geese, doing a little puddle work in the driveway.  This is as close as I could ever get to them.

Nine geese is a lot for any farm, especially one without a pond.  Of the seven goslings, one died fairly soon after hatching and one gosling got “spirited away,” just vanished one night (first time that ever happened here).

Like anything on this farm, any new undertaking has to be a joint venture.  Tom neither liked the live geese nor liked them as dinner, so…I can cross geese off the list of self-sustaining, easily-raised home poultry.  It’s a bit of a shame because they’re more flavorful and easier to care for than chickens; they graze constantly when the grass is green and otherwise are much more self-sufficient.  They don’t even need a shelter in our climate!  They just need some dry straw to nest in so their feet don’t freeze overnight.  I am really glad Yoli and Mel have the opportunity to raise more babies in the future.  I really thought they were adorable.

9 responses to “On goose stories”