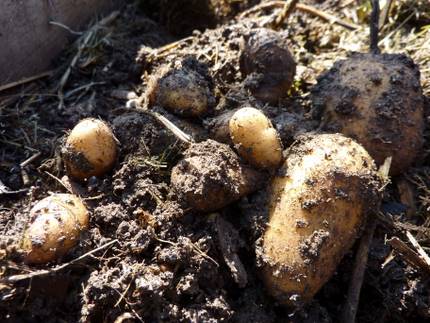 I admitted to a friend of mine that I have been having some episodes of insomnia lately.  My cause for worry?  Not global warming, not the health-care fiasco, not a terrorist attack.  Nope.  I was worried about my potatoes.

What’s to worry about potatoes?  Plant one in the ground, you get back 8-10 potatoes:  that kind of math should cause me no worries, right?  Well, true to form, our August has been a wet one.  And wet soil can mean rotten potatoes.  So every nightly thunderstorm, every nightly sprinkle, CLICK my eyelids flash open and I worryworryworry.

The first year the skies opened up in August I was told “this is highly unusual.”  Normally our Augusts see about 4″ of rain, nothing to sneeze at, but every year since I was apprised of what is “normal” we have had, in some instances, more than twice that number, sometimes on the same weekend.*  And here, the last day of August, we’re 3″ above normal.  Time to get the spuds out of the ground, and it’s time to find the time to do so.

(*If something happens four years in a row, isn’t that, well, NORMAL?  Like most things, I think we need to adjust our thinking.)

It’s a pity.  Leaving them in the ground (without rain, that is) is a great way to store them.  I would simply harvest them before the frost.  Ah well.  I have harvested about 75% of them and, well, I can now sleep at night!

7 responses to “On garden worries”