If your squash plants appear perkily green one day and wilted and yellow the next, a squash vine borer might just be your nemesis.  This year has been a productive one for squash vine borers in my garden, so I thought I would show you the signs–and maybe cures–to slow down this pest’s rampages.

The adult moth, which looks something like a red-legged wasp, lays its eggs on either the base of a leaf or the base of the plant’s stem.  The larvae, then, either chew their way through the leaf stem and down to the base of the plant or they just have a prime banquet at the base.  So, one way to prevent the moths from laying is to cover the plants until they start blooming (most squash plants rely on insect pollination and need to be uncovered).  This works fine for small summer squash, but for me, well, my 30′ long pumpkin vines are really not going to be covered in row cover any time soon.

Crap!  Frass!  (But frass IS crap…) Plus, the stem is no longer green; all bad signs

So, I remain vigilant, checking the stems (right about where they go into the ground) for frass (the chewed pulp of the stem:  it looks like sawdust) and for squishy spots.  Out comes my utility knife and a piece of wire.  I cut the plant where I find the hole or the soft spot, and I excise the larva, hopefully whole for the chickens, or squished up with the wire if it’s in an impossible spot.  I make sure to run the long way with my cut (that is, in the direction the plant is growing:  like a tree, most of the moisture flows around the outer diameter of the stem) so I make sure my cuts are vertical, not girding it at all.  After surgery, I bury the whole area where the stem was cut, add more compost to the roots, and water the plant well. 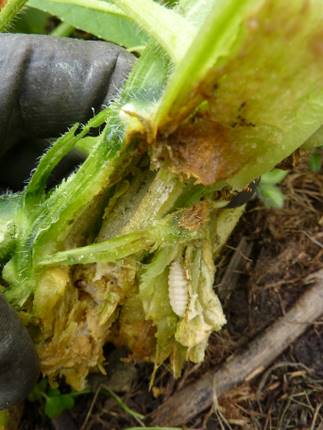 Little white grubby-looking larva:  this stem was a veritable nursery school of them.  I don’t know if it will recover.

Another thing I do is to make sure the vining plant has more than one rooting spot, so I bury the growing canes anywhere they hit the dirt:  the plant won’t die this way if it is really struck hard by the borer.  Most vines will do this by themselves, incidentally, but it’s nice to help them out.  Another trick I have heard about but not practiced is to wrap the base of the plant in tinfoil to discourage the wasp from laying.  I am not sure this would work, so my roll of tinfoil remains in the pantry.

The one bad thing about my method is it’s not exactly proactive, it’s reactive.  With the exception of burying the branching vines, it’s a daily diligence to verify the borer’s presence.  Another thing on the task list, that is.  But that’s okay.  It’s gainful, rather gross employment!

This entry was posted in nature, sweat. Bookmark the permalink.

15 responses to “On squash vine borers”