There is a theory out there whose premise is, once global warming and Peak Oil collapse the world as we know it, we’ll all need to get back to the gardens, but we’ll need a boatload of perennial vegetables in there because we’re going to be so time-crunched taking care of the rest of our needs that we’ll have little time for annual vegetables.  I have two quibbles with this argument.  One, end of the world or no, we should ALL get back to the gardens, and two, if the world collapses, so too do our day jobs, so we’ll therefore have LOTS of time for any type of gardening, perennial or annual. How long does it take, really, to plant a few rows of beans?

But any time-crunched vegetable gardener likes the idea of perennial crops.  Trouble is, there are very few vegetable crops that are true perennials:  asparagus, artichokes, cardoon, rhubarb, Good King Henry, some onions; that’s about it.  However, many crops can become perennial if you let them reseed themselves! This actually rewards you two ways:  one, you don’t need to replant them, and two, your laziness actually finds reward.  I should also add point three:  Volunteers are Good. 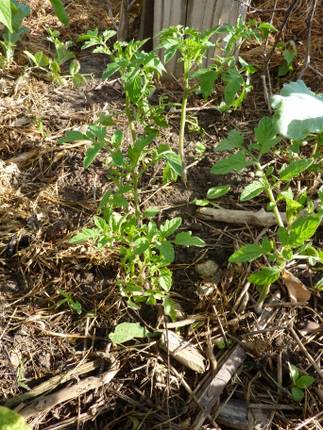 This picture shows Year #4 of a tomato crop.  Five years ago, my mother brought over some of those tiny annoying grape tomatoes because she was going out of town and figured we could use them.  Considering I am the only raw-tomato eater in the house and I find these tasteless things abhorrent, the majority of them made it to the compost.  And from the compost, the seeds found their way to this small patch of earth.  Granted, it will be the end of August when I get to harvest a tomato off of them, but look!  Perennial tomatoes!  And I should here mention these things taste so much better than my mother’s cast-offs.

So:  the moral of the story:  A bit of laziness is good!  Cold compost (that which does not kill all seeds) is a good thing to spread around the gardens.  So is letting a few things run to seed to self-sow.  It might just save you some time next year.

26 responses to “On perennial vegetables”