On the chicken rush 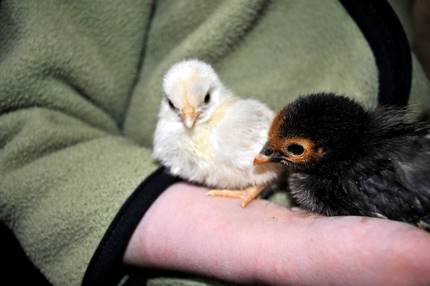 The child and I went online last weekend to put in this year’s chicken order (meat and egg birds).  The online catalog at our normal place was down (weird, but perhaps just a fluke) so we went looking around the other online hatcheries to see what we could see.

What we could see was booked chicken orders going from now to June!

As you might know, I am a glass-half-empty kind of person.  I wouldn’t say I always skew negative, but I do so more often than not.  But (but!) I think this uptick in chicken-rearing is a good thing.  More people are giving it a try, it would appear.  As you know, my perfect world would have most houses with backyard greenhouses AND chicken coops, so my inconvenience seems like great news to me.

Eventually, we would like to be self-sufficient in chickens, both as meat and as layers…that day will one day come.  Last weekend, though, I just wanted to mail in my check for my 50 birds, expecting them at the homestead in early June.  And it would appear that June is the earliest I can get them, isn’t that strange?  So, on June 2nd, I expect to receive a call from our post office about a box of 50 peeping chicks…

We got two more bantam chicks on Thursday due to another trip to the feed store.  Actually, the child wanted two white Brahmas but the minimum order from our hatchery was five and (gosh) I almost hesitated and said “sure,” sucker that I am…then I remembered I could probably take her to the feed store and find her a single white bird, satisfying her singular desire.  So here it is, the cutie.  Tiny little thing two weeks younger than the other baby bantam Ameraucana:  we have no idea what kind of bantam this white one is, but the other unseen small one is a frizzle Cochin bantam: crazy!  Chicken crazy!

Happy fuzzy Easter chicks to you all!

12 responses to “On the chicken rush”