But it’s what’s for dinner 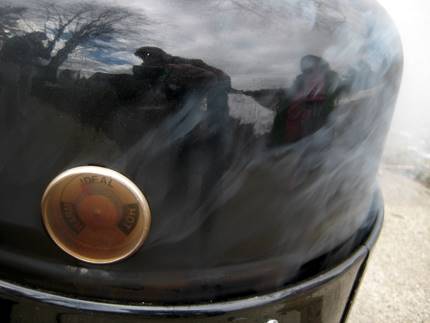 Family portrait in the smoker’s lid

This is said with somewhat clenched lips, with a slight sucking-in of breath:  meat, after all, is what we are told to crave.  It’s what’s for dinner if you believed the hype, and if you grew up in 50s-80s America, its nightly presence normally took up most of your plate.   THIS household became omnivorous only recently: Oct. of 2007, to be exact.  I put meat back in the diet when we began to find humane sources nearby and then last year to raise our own.  The girl wanted it, the husband wanted it, and, in reality, it’s a fairly low-impact source of nutrition if you live a locavore’s life in a snowy place like Michigan.

I am much more in love with meat when it remains off the center/majority of the plate.  As a condiment, as a flavoring, it’s really quite exemplary, and really ridiculously easy too.  (Frankly I think my ho-hum reaction to that full freezer is that the preparation of meat requires very little of me.  Not quite heat-and-serve, it’s still not much of a challenge to cook if you’ve been used to the alchemy required of vegetarian cookery.)  So when I saw a recipe recently for “bacon” made with smoked pork shoulder, I told Tom to get out the smoker and let’s get cooking.  I can use the “bacon” in many meals, bean-y, vegetable-y meals, for the whole week.  And after a little skillet frying, it makes this weeknight’s serving of breakfast-for-dinner a little more smokily special.

12 responses to “But it’s what’s for dinner”