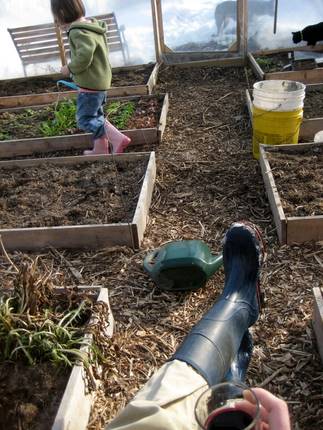 Engaging in a little light therapy in the old greenhouse, 4:00 on Sat. afternoon; 85*F and sunny.  (Light and wine therapy, I suppose, for me.)  The 5 gal. bucket holds melted snow, the cat is searching for voles, the dog is watching the cat and the child is happily watering the lettuces.

We had a bit of a thaw this weekend.  It got to be a record-setting 55*F on Saturday.  Though this is a nice change, it tends to make us all a bit stir-crazy and spring-willing.

I had not quite realized how much snow we had gotten until some of it melted.  There are now tufts of grass down at the bottoms of the paths that Tom had snowblown about the property:  the geese and turkeys have flown their pen in search of this greenery, and cannot be tempted to return until the sun goes down.  This is understandable.  But here’s a funny thing I hadn’t quite realized was happening until, well, until some of the snow had melted.

Have you ever miscalculated how many steps there were on a run of stairs and you stomped, searching for that last step that isn’t there?  It spooks you, doesn’t it, and your heart skips a beat.  Well.  The snow was so deep that, even in the areas we’d plowed, I was literally stepping down into every outbuilding, pen, garden, and greenhouse, and I had gotten used to it.  It’s kind of like a step had slowly grown at the entry into one’s living room, say, or one’s kitchen.  Well, I stepped out of the greenhouse, stomped, and nearly twisted an ankle.  Yipes!  No snow!

9 responses to “On warmups”