On a child’s-eye view to the season 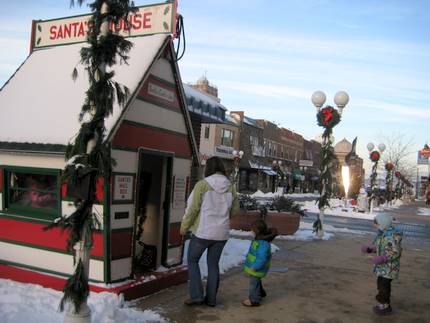 That’s our daughter in the crazy-colored coat.  What you can’t see in this photo is that she’s dancing from one foot to the other in anticipation.

Today is the last day of school, and it’s a snow day!  Practically every school in the Lower Peninsula is closed due to snow and ice, and the child is horribly disappointed.  It was to be Pajama Day as well as a whole roll-out of Solstice, Kwanzaa, Hanukkah, and Christmas-related celebrations.  Poor child.

Seeing Santa yesterday was entirely her idea, or rather, an idea she picked up from school.  I certainly try not to feed into the myth (I tend to have a no-lying policy) in that if she asks, I say, “Yes, honey, some children believe Santa will come, and we’ll just have to see if he comes here too.”  In point of fact she’s a lot more interested in his reindeer and, according to her father, she didn’t ask Santa for a thing but grilled him about his flying sleigh-pullers instead.

This has nothing to do with gardening, I realize.

This entry was posted in nature, weather. Bookmark the permalink.