On big poultry (or, And then there were five)

Our goose (isn’t she pretty?)

So.  I mentioned feeding the turkeys and geese some cabbage yesterday.  I figured I should show you them, too. 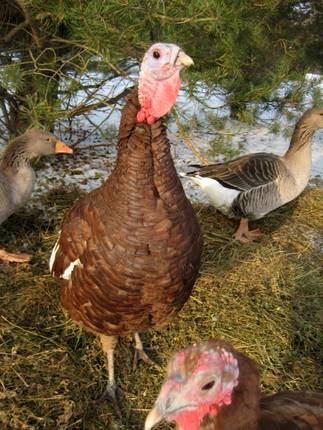 Tom has started calling our tom turkey Travis.  I’m not in love with the name, though.  That’s the hen in the front:  she’s impossible to take a clean picture of because she loves to peck at the camera.

We got them as babies at the end of June from Privett Hatchery.  The geese are production Toulouse and the turkeys are Bourbon Reds.  I ADORE them:  they make life on the farm so very fun.  Since Day One, they’ve been friendly and people-focused:  you have to train baby chicks to like you, so having these six little instantly amenable puffballs of fluff was quite a surprise.  The turkeys bonded with the much-larger geese and the geese bonded with our much-larger daughter.  We’d let them out in the grass and they would follow her, running, flapping, after her as she’d tear off, giggling.  We would do our nightly play sessions with them after dinner all summer and fall.  It was like having six feathered dogs following us about the property in the evening.

Six, and now five.  One turkey, a girl, was the highlight of our Thanksgiving feast.  Heirloom turkey is quite different than your average Butterball bird.  It’s really tasty, for one; the meat is darker, and very juicy.  Another difference is there isn’t a lot of meat.  Bourbon Reds are medium-sized birds, and our birds can fly, and do.  (You won’t see even a half-grown broad-breasted production bird fly.)  So we didn’t have a lot of leftovers, which, frankly, was fine by me.  Turkey can get tiresome.

It took about forever for the turkeys to get large enough that I could discern if I had boys or girls or both.  The geese took lots less time, but that’s mainly because they matured so much more quickly, not because the job of sexing them is easy!  Toulouse geese and ganders look a lot alike, so you have to look for more subtle clues:  the boys, for example, have more prominent eyebrow ridges, and are more aggressive with strangers and dogs.  I had one tom turkey and two hens, and I have one goose and two ganders.

The three boys out front,  yelling at the dog.  The two girls are hanging back but are also giving the dog a piece of their mind.

They all fly, incidentally.  If they get anxious and see me come outside, at least four of them (usually two geese and two turkeys) will fly out of their pen and run to me.  It’s dark outside now while I am writing this.  If I were to, say, open the back door right now, I will get honked at by the geese!  uh-WAYYahhAHH!  I usually let them out in the evening still, just before dark:  the turkeys come out of the pen and hang out with me as I do my chores, and the geese come out and fly up and down the side yard.  I always wonder what they think when they see all the Canada geese flying overhead.  Do they think “I can do that,” or do they think “Hey, cousin!”

For the most part, these guys don’t eat very much, at least not when the grass grows.  I pastured them and they pretty much would mow the grass down to nothing for us.  I just moved their pen around.  Now, during the winter, I supplement their feed with lettuces, veggie peelings, fruit, and on occasion whole cooked root veggies: they love anything we give them, frankly.  And this little factoid (i.e., that they love garden goodies) is making me adjust my planting plans for next year.  Gotta grow the critters some grub too…

Got some food for us?

15 responses to “On big poultry (or, And then there were five)”