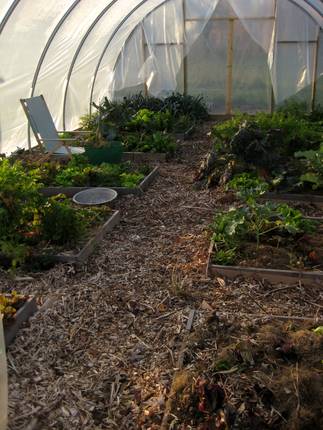 Whew!  We got the plastic on the second greenhouse Saturday.  Finally, the weather cooperated.

Imagine putting a stocking on a 28′ long, 26′ wide leg, and that’s the challenge we faced.  For once there was only a tiny bit of wind, no rain, and decent temperatures, all on the day we planned to finish the project.

We have two roll-up sides but I won’t be installing those until next spring, so I buried the plastic on one side and held it down on the other.  I also laid woodchips on the paths of this and the old greenhouse.  The electric company came by for their quadrennial tree-butchering session this week:  this year they removed one entire tree and only hacked up 6 more in our front yard.  I persuaded them to at least give us the chipped wood and logs.  The timing was pretty good as far as the greenhouse is concerned but the house looks nowhere near as hidden as it did before from the road.  Sigh.

Anyway, I am a bit sore but really gratified.  Let it snow!  We’ll be rich in greenery.

This entry was posted in greenhouses. Bookmark the permalink.