The end of this year’s meat chickens 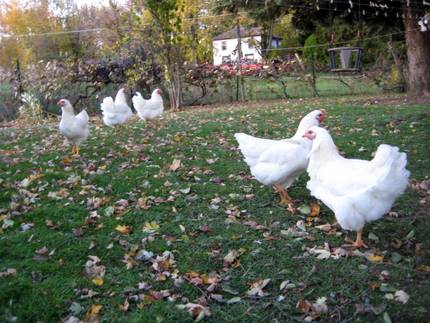 Lucky girls:  six of our last round of meat chickens have had an extended life on Death Row.  How could this be, you ask.  Have they not run out of appeals?  Did the governor issue a stay of execution?  What could be the reason, as these girls are now 16 weeks old or so and are quite large enough to be considered freezer fare.  Well, I confess I have simply been busy.

I have been quite pleased with this last batch of meat birds.  As per fellow bloggers’ suggestions, I tried Privett Hatchery in New Mexico and got the turkeys, geese and slow-growing Cornish X chickens at the end of June.  Here I admit that despite my best-laid plans (and $100) I am not much of a fan of The Chicken Tractor.  Confinement is confinement.  Therefore, Round 2 of the Meat Chickens (a smaller batch of 16 birds) got to live in relative freedom* within the chicken yard with the egg birds.  They ate a mix of grower and regular feed, got access to dirt baths, grass, bugs, their own mini-vineyard of grapes, got to fly up on the coop’s perches at night, had fun dodging raindrops by running into the Chicken Condo, and in general got along as members of low standing in the egg birds’ pecking order.  For me, it was a much more amenable situation:  I did not worry about them at night, I didn’t need to move the tractor daily, and the birds were happy doing chicken-y things.

It helped that the genetics of this particular batch of birds worked better in a chicken yard than in true confinement.  I had three sad birds from the first batch who never grew as rapidly or as well as the first 20-ish, and I had them live with the egg birds, too, but these big-breasted babies were so misshapen and had such leg problems that I needed to lift them over the threshold of the coop morning and evening.  The threshold is a whopping 7″ off the ground so it shows how truly effed-up Cornish X broilers have been bred.  Listen:  I am still a bleeding heart at heart, and each chicken’s life is precious to me.  I cannot in good conscience let any animal in my care suffer a life of horror or hurt, and these poor birds’ inability to even jump off the ground bothered me profoundly.  How could they ever have escaped a predator, I wondered.

Anyway, it is time for the last six to go.  We’ll see how many chickens we still have in the freezer at the beginning of next year’s chick ordering season.  Having never done this before (hell, I didn’t even eat meat until a year ago) I have no clue if I have over- or underestimated the needs of my family and friends.  Next year’s Meat Birds might not be so numerous, or even, necessarily, birds bred to just be meat birds.  We might just try breeding our own, and intend to start with a batch of relatively rare meat/egg birds: the Chantecler.

* Re: confinement.  The chicken yard (50’x80′) is a rather porous affair.  There are two holes in the fence and the chickens can get out but mostly choose not to:  the egg birds and guineas walk out in the early evening for a bug/grass dinner, and the meat birds, being timid, stick by the pond, or at the chicken yard’s perimeter.  Everyone knows there are hawks about and that it’s safer in the yard than not.  As long as they get their needs met (shade, shelter, dirtbaths, water, plentiful food, a dark nest) they are all quite happy staying within the yard.

This entry was posted in chickens, etc., death. Bookmark the permalink.

10 responses to “The end of this year’s meat chickens”