Shchi da kasha pishcha nasha:  A Russian proverb loosely meaning “We need nothing more than cabbage soup and porridge for our food.”

So, this local eating thing has boosted my decades-long interest in la cucina povera (peasant food).  By looking at my own little warm patch of lakeland-Michigan soil, I have often wondered how colder, less sunny climes have fed their people.  Onward to Russia, my friends.

When I was a poor grad student, my boyfriend and I trolled the Polish and Russian eateries in our Chicago neighborhood.  These places, of the banquet hall, all-you-can-eat variety, were true vendors of stick-to-the-ribs hearty fare.  It was in one of these places that I discovered buckwheat kasha, cabbage soup, and borscht.  (Oh and pierogi: those little savory pies would really tip you over the edge to gluttony.  We were always thankful we had no car and were forced to walk home.) 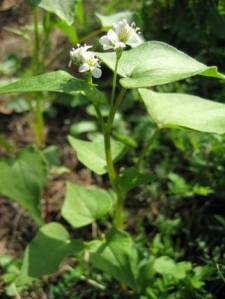 Kasha simply means porridge, and it does not necessarily have to be made of buckwheat.  Buckwheat is a small pseudograin (unlike other cereal grains it is not a grass, but instead part of the polygonaciae family, which includes bindweed, rhubarb and sorrel) that’s fairly easily grown because of its short growing season.  I plant buckwheat in my gardens to act as a green manure; it’s a tap-rooted, fleshy plant that’s easily frost-killed and is actually rather pretty with its white flowers.  The name “buckwheat” comes from the seed’s resemblance to miniature beech nuts:  Buchweizen, in German, or “beech wheat.”  Its botanical name is Fagopyrum (fagus=Latin for beech, puros=Greek for wheat).

Like most cereals, though, buckwheat groats (grains) have a tough shell that is usually removed before making flour.  The shell is removed by crushing with a roller and sifting/blowing the remainder to separate the seeds from the shell before milling.  Some of the dark shell usually cannot be removed and shows up as the darker flakes in buckwheat flour.  One doesn’t have to remove the shells to make kasha, though.  (Thankfully.)

To make savory buckwheat kasha: In a deep skillet, lightly toast 1 cup of buckwheat groats (the caramelizing process of browning the groats adds a nice taste to them) over medium heat for about 3 minutes.  Remove from pan, and brown a medium chopped onion in about a tablespoon of butter.  Add 2 minced garlic cloves, 2 cups vegetable, beef or chicken stock and salt/pepper to taste; cover and bring to a boil.  Add the buckwheat, stir well and replace the lid.  Cook over medium/low heat until most of the liquid is absorbed, about 7-10 minutes.  Remove from pan onto a platter and fluff with fork; taste for seasonings and adjust.  It starts out kinda sticky but when it cools it separates.

To make buckwheat crepes: Combine in a blender 2 eggs, 1 cup milk, 1/2 cup flour, 1/2 teaspoon salt, 1/2 cup all-purpose flour, 1/2 cup buckwheat flour, and 3 tablespoons melted butter; blend until smooth.  Remove lid and scrape down sides and blend some more, about 5 more seconds.  Cover and set in the refrigerator to rest:  I make mine in the morning then use in the evening; the all-day rest gives the flour a chance to absorb the liquid; I rebuzz the batter before using.  Heat a small nonstick skillet (up to 10″) or crepe pan, then brush with a little oil or butter; when it sizzles, it’s ready.  Pour about a scant 1/8th cup of batter into pan and swirl immediately to coat the bottom of the pan.  Cook until golden on bottom (about a minute) and flip, carefully, with your fingers or a flexible pancake spatula; cook another 30 seconds or so until finished.  Remove, stack on plate and keep warm and repeat; you will have about 14-18 crepes when finished.  Fill with anything:  melted cheese, sautee’d spinach or beet greens, leftover meats; drizzle with some lovely sauce.  Crepes are mutable, crepes are infinite.  Make a crepe cake!

Thank you Deborah Madison’s Vegetarian Cooking For Everyone for the backbone of these recipes.

This entry was posted in Eat Local Challenge, food, seeds. Bookmark the permalink.