On fear of food 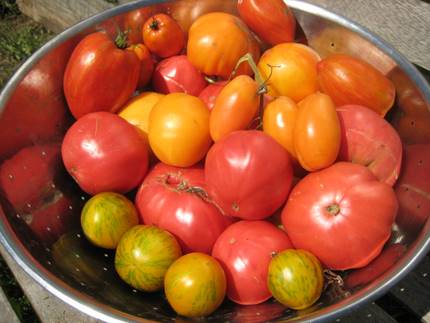 No Fear:  I might tire of seeing them daily now, but come January, this will be a sight for sore eyes

One of the more interesting conversations I have had recently was (no surprise here) about food.  Specifically, the fear of food.

When in Boston, I spoke with a woman who runs her own CSA.  She and her husband had retired from teaching and went into “the hog business,” raising up to 300 heritage-breed hogs annually.  Her husband’s untimely death led her to shift her farming focus to vegetables, and the subscription service of a community supported farm was something she could handle, though it still meant a lot of work for her.  Her grandparents on both sides were farmers, as were her husband’s; but her mother was “modern,” she said, and did not have a garden or can her own vegetables.  “We had four children, though,” she said, “so having a garden was an inexpensive way to put a lot of food on the table.”

We talked a lot about her customers.  Because she comes to vegetable gardening from a point of her own personal thrift, she was quite surprised by her customers’ reasons for subscribing to her CSA.  “It’s fear, not money.  They’re afraid of food, the mothers especially.  I just don’t understand it.”  Were they afraid of your food, I asked?  No, but she sure gets a lot of questions about growing methods.  “A lot more than I used to get, anyway,” she said.

We talked a bit about our farm.  “So you moved to produce your own food,” she said.  Yes, but not entirely, I admitted:  I liked the idea of having a country kid, and mostly, we moved here to be closer to family.  “But the quality of your food means something to you,” she pressed.  I had to admit that it does, but, more importantly, it wasn’t really fear of what I was eating that motivated me to DIY so much as I wanted to shorten the supply chain to, well, no chain at all.  “No middlemen, or women,” I said, smiling to her, and admitting I had relied on a CSA for our city vegetables for years, and thus, on someone just like her.

I had to admit later that I was kind of envious of her.  Though she was nearing the end of her farming career (at 70+ she wasn’t going to be able to run a CSA forever) she had completely missed out on fearing what she ate.  Hers was not the path of food choices based upon anxiety.  She always knew her food, her vegetables, were good.