What a big category, “winged pests”! 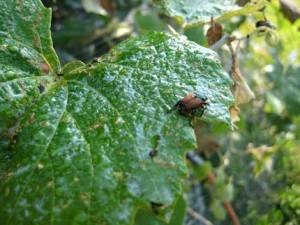 Every July we are ambushed by Japanese beetles. Everyone thought this year might be different because of the torrential rains that hit the Midwest earlier in the season, drowning the ground-growing pupae. Well, those rains missed us and we are having a banner harvest of beetles! Ick.

They mostly leave my gardens alone: the one thing they seem to really like (runner beans) I planted late enough (planted with the Peruano beans, actually) so they’ll miss them. So I find and squish a few when I do a garden perambulation; no big deal. Organic does not mean bug-free, after all. It’s the fruit trees and grapes that see the worst of it.

What these beetles do is Swiss cheese the leaves of growing plants. The plum tree out my window here is positively lacy, they’ve done so much damage. The grapes, though, are okay, as are the pawpaws, cherries, peaches and small apple trees. Tom sprayed clay on them. The clay (kaolin clay) is actually the same stuff used in some makeup: it’s a very fine white powder that, when mixed with water, will coat leaves and make them unrecognizable to fruit- and leaf-eating pests. Its downsides are two: rains wash it off, and it does interfere slightly in photosynthesis, though the latter would be worse if the beetles ate the leaves. The clay is typically used in managing pests on apples. It is as organic as you can get, considering it’s dirt. 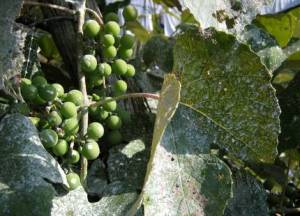 Tom sets a few traps for them, too. He also hand-harvests with a canning jar half filled with soapy water: go out in the early morning and scrape them into the jar. The soap keeps them from flying away. Then, he gives the trap’s and jar’s contents to the chickens. Crunchy on the outside!

This entry was posted in nature. Bookmark the permalink.

11 responses to “On winged pests”