On fall planting, in summer 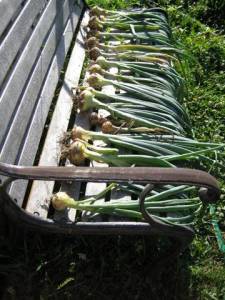 Hello, my name is El, and I am a succession planter. When one thing is harvested, I plant more.

This mostly works with things that have short lifespans to begin with: usually, in the veg garden, this means the non-fruiting plants like lettuce and carrots (grown for leaves and roots respectively) or fruiting things whose period of productivity is best if it’s ridden in a wave (think bush beans, or some cucumbers, which come ripe at once).

One notices, though, that some things, some whole garden beds, are best if they’re also ridden in waves. Some of my spring crops are ready to be pulled out and not resown, like the onions, the peas, the favas, and early cabbage and broccoli. Their season (as far as I am concerned) can happily be finished. I have plans for the real estate they’re vacating. Mostly, though, I am watching the temperature of the soil.

What? Soil temperature? Are you telling me I also need to worry about soil temperature, El? Don’t we have enough to juggle with, enough to learn about vegetable gardening to NOT worry things like how hot the soil is getting?

Well, yes. Don’t worry about soil temperature. There is something to know about each and every seed, though, be they flowers, veggies or weeds: Each one has a soil temperature bell curve attached to it which dictates its germination. There is a reason I hold off on planting lettuce again until mid-August: the seeds won’t sprout! If I wait until then, they will. Almost no seed (except some weeds of course) germinates when the soil gets and stays above 85*. Even if the air temperature is nowhere near 85* (like here most days) the soil itself is, especially if it’s unshaded and unmulched. But, yes. Onions surprisingly will germinate and grow in soil that’s 45*, sometimes colder. Tomatoes like it between 70-80*. Lettuce 50-65*. If it’s hotter or colder than this, they do sprout and grow, but it’s not ideal (thus, the bell curve).

I do have fall crops, though. This weekend, I will make a second sowing of broccoli and summer squash. Some of the broccoli will live on, happily, in the greenhouse all winter. I usually get squash bugs on my zucchini and summer squash so I make a second planting of them; I find they do better in the cool of autumn, that, and I freeze parts of this batch. There are other things, too, that just like autumn more than spring and the heat of summer. In the brassica family, this includes rutabagas, kohlrabi, and turnips. Fennel and dill are also on my list, as is escarole, sugarloaf chickory, radicchio, and more parsley for the greenhouse. And I will plant more peas. They hate me for doing it, but it’s usually mid-July when I set aside an area for them. As long as I keep them well watered, they will blossom the first week of September.

(Oh, and there are the greenhouse plantings to consider, too! That’s a separate field of consideration, though.)

Anyway, there’s lots to do, as you can see. I find that having a greenhouse does help me relax a bit about when things NEED to be planted (my sweet corn, for example, is only ankle-high), but it hasn’t made me less of the mad sower I have always been. It’s fun, I think, getting this much productivity out of my gardens. (No Soil Left Unplanted, the unofficial motto.)

10 responses to “On fall planting, in summer”