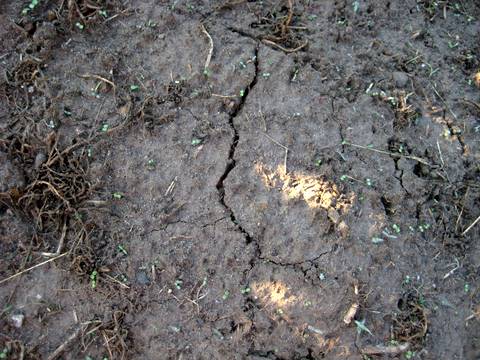 Clay soil: it absorbs water and expands, then expels water and contracts. This ability is called “plasticity.” I can’t throw a pot with the stuff, though, thankfully.

I thought rather naively that I would have sand at our farm. Being this close to the beach, I figured it was a part of the picture. Glacial movements are a funny thing, though, and I am sand-free here and instead have lots of clay.

This is both good and bad. Clay is wildly productive stuff. There’s a chemical reason for that: its tiny, flat particles, though notorious for other reasons, are great at binding with good metals in the soils itself through an electrochemical exchange of cations. Clay is negatively charged, the metals positive, thus the binding. Sure, we all need to go back to high school chemistry to understand it fully, but let’s just say if there’s some calcium or potassium floating around, the clay will get ahold of it and keep it.

It’s a bear to work with though as a gardener. This is Season #4 on the farm, so I have had three years of observation. Not nearly enough years, but…at least now I can at least speak a form of clay pidgin (har). My first year, I was so worried about the water-soaking potential of this soil that I did not mulch at all. Well, that was a huge mistake. Water from a hose or from the sky loves a plant-free (weed-free) bed of clay soil: it smashes the top layer into an amazing flatness that then gets baked by the sun. Nothing wants to go through that, and if you think of Death Valley you can understand what it begins to look like.

Clay is a problem because of how heavy it is: there is not much air in the space between the particles, unlike sand. Incorporating lots of stuff in with the soil is one way to lighten them, but in my experience it’s only a temporary fix. My first raised beds were made with a ton of compost, manure, leaves, grass clippings and then that native soil that I tilled beforehand, all mixed together. (Never work wet clay soil is another cardinal rule, incidentally.) These are still the materials I use to make new beds, but I tend to layer things instead: tilled earth, 2″ compost, 4″ dried grass, earth from the paths between the beds, more compost, more grass, and a topcoat of some of that big truckload of (clay) dirt I got earlier this spring. Unless I am planting seeds directly into the bed, the new transplants I stick into the new beds then get mulched to the hilt: 4-6″ of grass clippings, usually green. They turn brown eventually, and get refreshed every time Tom mows (which is about every 2 weeks).

Once the beds are made, I never till them again (a near impossibility anyway considering the beds are raised) and I never work them at all except to mix in the top inch or two in the spring. Vegetables are annuals in the main: in the clay soil elsewhere on the farm, perennial roots of grasses, trees and flowers (and weeds) are always present and thus humus is made in situ. Veggies are annuals, though. I tend to lop off the tops of my spent plants (not the brassicas or tomatoes but everything else) and leave the roots in place to rot and thus claw through that tough stuff.

Mulching is entirely necessary, however. It keeps the weeds down to zero, or near enough; it reduces my need to water down to near zero too. The worms and other wriggly things, which flee to subsoil level in an uncovered bed, are right under the mulch (and right at the top root zone) in a mulched bed. Last August we had so much rain that the beds DID drown, and I lost most of my cole crops; I pulled the mulch off to dry the soil out. I am not sure it worked, but the garden is now an island surrounded by a ring of perforated drain pipe, 300′ total, as a form of insurance. As I harvest the last veggies in the fall, I immediately sow green manures (a mix of rye, oats, hairy vetch) that will grow fairly slowly and will winterkill (sometimes). This creates a mass of vegetation a couple of inches thick. In the spring I use a three-tined cultivator and mix it in.

Can I say I love clay soils? Not really. Considering, though, that my kitchen garden is where there has been a kitchen garden for the last 90 years…and has not had fertility, rust, mildew, or wilt issues…I think I will keep it.

This entry was posted in nature, sweat. Bookmark the permalink.