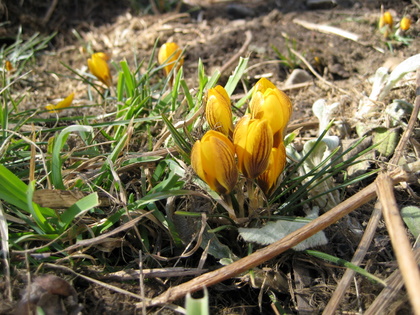 Maybe it is just me, being just plain tuckered out after a long winter, but I do swear my senses are more acute as the seasons do their changing.

This week has been an interesting one on that score. Our snow (about 11 very drifty inches) of last Friday was unexpected. I worried about the migratory, mostly bug-eating birds and all the newly-emerged amphibians in the neighborhood. What would those poor robins eat now that their worms were covered over with the white stuff? Would the newly peeping peepers re-hibernate?

What I noticed was our birdfeeders were well visited by the native birds, much moreso than normal (normal being Pauline) in the winter. The robins and red-winged blackbirds still were out there, and still filling the days with their sweet song. It was rather discordant, stepping outside the house to a winter scene but hearing Summer in the air. And then, amazingly, and with all that snow on the ground, I heard the peepers again on Sunday.

Tuesday saw the snow retreating slightly, exposing islands of grass in the snow that each robin defended angrily from others. Wednesday, there are now islands of snow within the grass. I walk out after dinner to dump the compost onto the pile and I saw (and heard) my first bats of the year. As I walked through the grass to the compost pile, I hear the wet sucking sound of retreating worms…always a happy sound, even if it’s somewhat mind-blowing (it takes a LOT of worms to actually be heard).

The crocus are fading, the other bulbs rising; the pair of Canada geese who live in the pond behind us have returned. The snow, alas, is still on the ground; the ground has now simply turned muddy. It will be a few weeks until the ramps and asparagus are up enough to be found and eaten. And one day, soon, with hope, those potatoes, peas and favas will get out of the basement and into the ground. This was the scene last night after dinner, so I am not so sure when that’ll be.

One response to “On changing seasons”