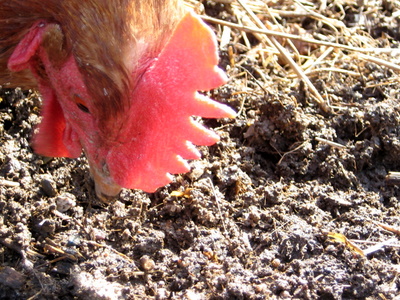 Sundays, as I have mentioned, are Computer-Free days here at the household. They’re also make-up days, as in, wow, I need to do X so I better do it this weekend: hmm, Sunday’s free.

Sometimes, like this Sunday, I get ahead of myself. The child was sick and sleeping, and under her dad’s care, so I went outside and followed the chickens around. They’re out of their batting cage now, and again have free rein over the property. I opened up the gate to the garden to the two oldest (and by far smartest) birds, Bonnie and Bloody Beatrice, and then I followed them.

I’ve mentioned before how fascinating it is to observe domesticated creatures doing their thing. Any farmyard animal is interesting, but a free-ranging chicken can be highly entertaining. Scratch scratch peck peck. There’s a rhythm to what they do that’s a quite coordinated dance: there’s nothing I do in my life that’s nearly so…involved. (Trust me.) Bonnie, especially, seemed to really enjoy finding sowbugs under the mulch on the paths. Normally, she’d never touch these things, but normally (i.e., when spring actually comes to our corner of the world) those little roly-polys are everywhere, and thus not nearly so delectable.

It was likewise fun to see the ground of the garden again. Sure, there was a ton of snow covering things, but I will bet it’s been a good month since I have tromped around the garden. An eternity! Life was coming back; the garlic was tall, the ground in the asparagus patch cleared of snow…it won’t be long now.

4 responses to “On having time”